I have decided to write about this remarkable students progress, (With both his and his father's kind Permission) He is a 17 yr old student studying art at college as any normal 17 yr old would do, but what makes him remarkable in my humble opinion is that he suffers from a condition known as "Disteric Cerable Paulsy", or (Distonia) as it is commonly known as. This affects his right side, It is by no means the worst case but does mean that he has to put a huge amount of effort into just doing every day tasks including his love of playing the drums.

If you do not know what this condition is it is a condition that means he gets involuntary shakes of his right side and cannot control his hand / arm, nec or head movements though this only affects his head when he looks to the right, it is involuntary messages from the brain that causes spasms in the muscles leading to his right arm, hand and fingers. In order for him to achieve his dream of playing drums with a band I have to understand his condition and then start and reprogram his brain with regards to creating muscle memory.

Prior to me taking William on as a student he had being having lessons with a teacher for five years but he still could not read notation, unfortunately it oppears that this teacher did not think about how it would be possible to get William to read notation nore did he think about how it would be possible to get some movement into Williams right side. He focused on what "He thought William could do." Sadly there is a huge difference, as I have discovered whilst teaching William. ( 5 years of Wills ditermination Wasted), I feel this is a long time in Willliam's life that could have forged some great results. The longer I teach the more frustrated I become with teachers that do not take there students needs into account.

When I decided to take William on as a student I gave him an assessment with regards to his drumming ability, I soon realised that William's determination far out weighed his ability to play due to his condition. I decided that if I was going to help William I needed to spend time on the internet researching and trying to understand the  condition of "Disteric Cerable Paulsy". I made a point of putting william"s playing to one side and made a program of exercises for will to do to get his right side working using small movements and gradually increasing over time to create muscle memory, At this point Williams Dad sugested employing the help of a trained physio therapist to work with william to increase his overall movement on his right side,This meant I could suggest possible exercises relervent to drumming and the phisio could show will a safe way of performing the exerciese. This is a slow progress and one which requires william to spend hours just doing the smallest of  movements, when william starts to become stressed his right side starts to shake, this will be a constant problem for william for many years, and possably for his entire life. With a lot of hard work we can try to overcome some of the shakes by creating muscle memory so that william can achieve his dream.

I would just like to point out at this time that I am merly a Drum Teacher who has had no medical training or had experiance of working with people with Disteric Cerable Paulsy up untill meeting Will, All I am doing is taking a little bit of extra time and helping a young man work towards achieving his goal and every care has been taken not to aggrivate or put william under any undue stress whilst doing this.

After William had spent about a month on accuracy movements which consisted of very simple up and down motions and arm extentions, he was able to strike the practice pad with his right hand,with the aid of a finger support this meant william could now place a drumstick in his right hand with out dropping it.  This then gave us the foundations to move forward and started work with the pracice pad.

We started the  the first practice pad session with william working on singles Doubles and parradiddles (Very slowly to start with ) this was to start and improve Williams coordination for this he needed a finger support to prevent his stick from falling to the floor as he did not have enough strenght in his right hand to hold the stick.

Once we had found that william was able to strike the practice pad the next stage was to build some muscle in his wrist and fore armes, However before he could do this we had to work on his grip, this was done by using a lump of playdogh (recomended by his physio) to strengthen wills fingers. This went on for a number of weeks with william doing the exersice for his fingers and also his wrist and forearm. He strengthend his forearm by using a light dumbell in his right hand, just doing simple up down exercises every day as though he was playing with a drum stick.

Having now got to a stage ware will could not only hold a drum stick in his right hand but now had gained an amount of control over the stick we could then work on stamina, As william was only able to play for a very short time before he became tired we had to find a way to increase his stamina, so it was back to recording his progress in a book on a daily basis. we started at 10 - 15 seconds and over a period of 3 to 4 months of williams hard work and determination we increased his time to 2 to 3 min the average length of a song, this then got us to a stage ware will could now work on his time keeping at a low tempo. (we started at 50bpm ) again after a number of weeks he had managed to get to 80bpm.

We are currently working on Wills grip and his coordination between his right hand and left hand, This is something that I take for granted, it hadn't even crossed my mind that something so simple could be such a challenge to william so i have been working with Will on a very simple task which is catching a ball and also throwing a ball between his right hand and left hand and catching it. How is this going to help with Williams  drumming, Well the theory behind it is to get williams fingers to open and shut so that they can release and grip his drum stick as he is playing, something that I now do instinctively, Remember this should also increase Wills confidence in performing the task and should also help reduce his shakes as he increases with confidence.

Having worked on Williams grip for a couple of months it was time to give william another assessment, I decided to work on his singles Doubles and Parradiddles. This allowed me to see how his accuracy was coming on his stamina and also for him to put what he had learned with his grip challenge to the test, ie working his fingers to allow the sticks to move, you will see that by the end of this video William is becoming very tired which is something that we are currently working on. Stamina.

We are now getting up to date with williams progress so this next video below is of William Playing his very first piece whilst reading music, please remember the time scale between the first video on here up to this point is about 18mths, so a great deal of hard work determination on Williams part to get to this point makes me one very proud teacher. This is not the end of Williams progress but just the start The next Goal for William and myself is for William to be able to take his RockSchool Grade one exam and for william to play in a band using his right hand.

Here is to the next part of the journy.

Another proud moment in Williams progress, this is Williams first Piece towards his First Rock School Grade 1. 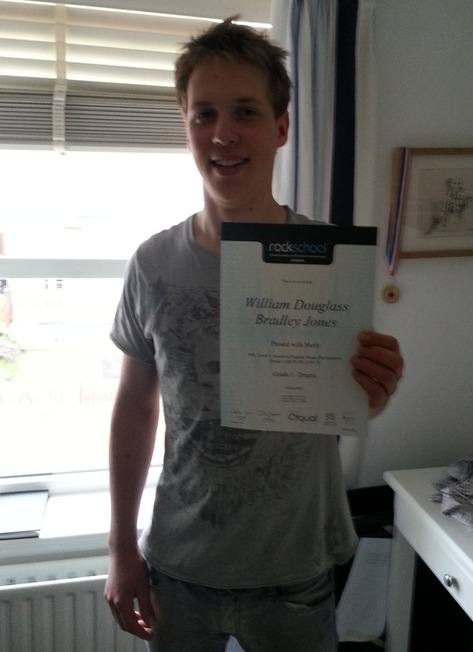 A very, very, Proud Day Wednesday 17/06/2015  when William attains a Merrit in his Grade 1 Rockschool Exam, Just over 2 years from us meeting and starting William on the road to his dream of being able to play the drums using his right arm / hand.

Williams Starts his Journey towards His Rock School Grade 2

Technical Exercise Doubles Around the Kit played as Fills

Now that William has passed his Grade One we are working on the second rudiment which is (Doubles) around the kit used in fills, something that does not come easy to my able bodied students let alone to William. This is not just for his Drumming but to strengthen  his coordination in his right hand /arm. We are starting this at 60bpm.

An Amazing Suprise for William

We are now just coming into December 2015 and I would like to tell you about the kindness of two people who have helpt William this year, back in July I wrote a letter to the editor of Drummer Magazine, (Jemma Hill ) about Williams progress, and asked if she could give him a mention in the magazine, he was going through a period of self doubt with regards to his condition as he had applied to an Art college down south which was to  start in september, and he was concerned that he wouldn't fit in.

Jemma replied saying Yes she would give him a mention but she wasn't sure which edition it would be in,time passed and William went to college in september as planned, I hadn't mentioned anything to William about what I was doing in case nothing came of it.

Then I recieved word from Gemma that it was going to be in the October edition which happend to be the edition which was promoting Drummer Live,

not only had she given William a mention but she had published my letter as " Letter of the Month".

I then recieved a message to say one of the exhibitors had read the letter and would like to present William with a Cajon for his achievments. This was just amazing and a massive gesture from the exhibitor ( Kandu Cajons), However Due to the distance William could not make it to the drum show so as I had already arranged to go with a fellow teacher I arranged to pick the Cajon up on Williams behalf, but that was not the end to it Daniel cohen from the Kandu Cajons had arranged for Martin Ditcham Session percussionist to a lot of top people (U2, Elton John, Tina Turner,Every thing But the Girl, Diana Ross, and a whole lot more). to come and sign the cajon. and may I say what a really nice guy he is. WWW.Martin Ditcham.com Please check him out, and please take a look at the Kandu Cajons website they make amazing instruments if you are in the market for a Cajon. they also ship world wide. Many thanks Daniel. 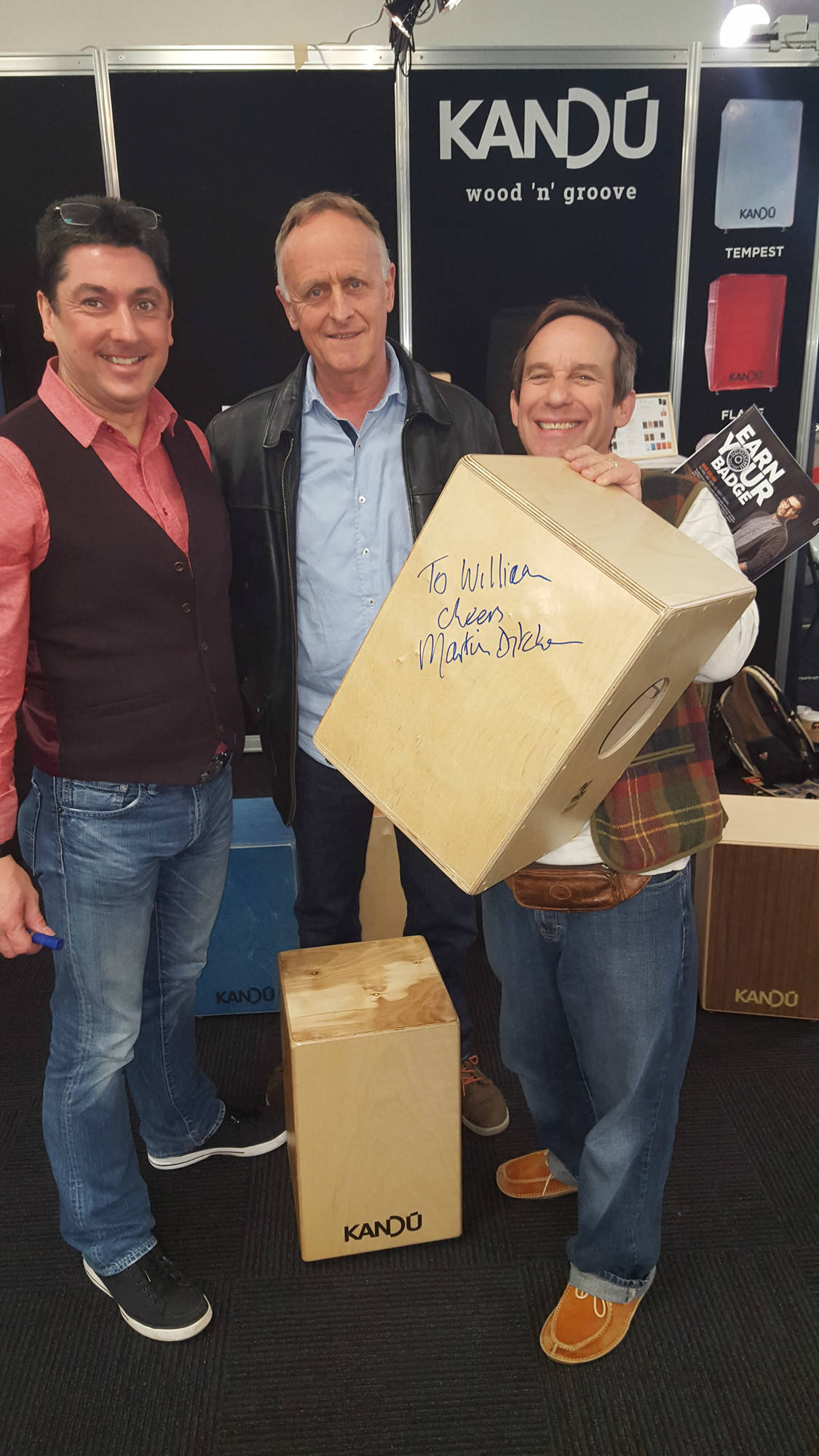 William Busking With his Cajon 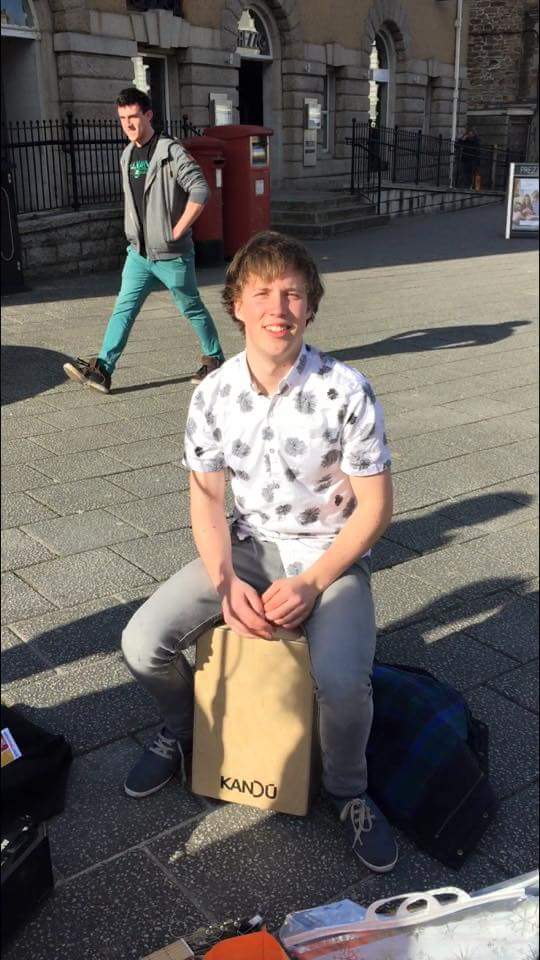